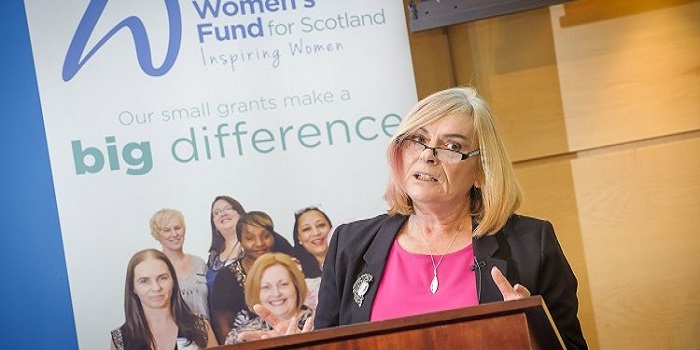 On Wednesday 9th September we held our second Grant Making Showcase at the Royal Surgeons Hall in Edinburgh.

The evening started off with our host, comedian and WFS board member Susan Morrison, going through the itinerary of the evening for the audience and Women’s Fund for Scotland chair Fiona MacLeod explaining why she got involved with the Women’s Fund.

Susan Morrison at the Edinburgh Showcase 2015

It was then time for our four groups to take the stage and pitch to the audience why they deserved the top grant. Just like our re-launch event, the audience ranked the presentations by a voting device which decided how spend the evenings grant making pot of £10,000.

Glasgow Girls FC, the group who took away £10,000 from the re-launch event, also came along to share their progress since 2013. It was fantastic to hear how much they have grown and their exciting news of a future trip to Gambia! It was also lovely to hear team captain Lauren Coleman express that by attending the Women’s Fund for Scotland re-launch event, it opened a lot of doors for the club and the girls. Without the funding and networking opportunities gained from that evening a lot of the amazing things which have happened may not have been.
See below to read more about Glasgow Girls FC progress.

“Our second live grant making showcase was a huge success, the evening really showed the passion, dedication and professionalism of women’s community groups across Scotland. The money received from the Women’s Fund for Scotland tonight will be a catalyst to change many women’s lives in the coming months.”  Fiona MacLeod, Chair of Women’s Fund for Scotland